ANH2020: Food environments and markets B

3University of Health and Allied Sciences

Urbanisation in Ghana is occurring at a rapid pace. This paradigm raises the concern of changing food environments and the accompanying transitioning of people’s dietary practices. Presently, there is little evidence on the driving role of urban environments on dietary practices in African cities. This requires an exploration of how habits related to food consumption are structured and organised in social practices, such as when unhealthy food and beverages are eaten, how quickly, where and with whom. Hence, this study investigated how unhealthy food and/or beverages are embedded in everyday life in Ghanaian cities.

Our study was sited in two Ghanaian cities- Accra (capital city) and Ho (provincial capital). We targeted deprived neighbourhoods in these cities and recruited participants with a quota sampling method (including occupation and economic status). We recruited 301 female and male adolescents/adults. All recruited participants were at least 13 years old and above. Qualitative in-depth 24-hour recalls were conducted via face-to-face interviews with all study participants. We collected data on all food and drink consumed inside/outside the home in the previous 24-hour period. The time of day of the food event (‘periodicity’); how long a food event lasts (‘tempo’); who participants eat with and where (‘synchronization’) were recorded. Scores were calculated to indicate the healthiness of foods based on energy and nutrient density. To answer the question of how unhealthy food and beverages are embedded in everyday life, we analysed how ‘tempo’, ‘periodicity’ and ‘synchronization’ are associated with the healthiness of foods consumed.

The dominant meal pattern was structured around 3 main meals a day with few snacks in between. Most study participants consumed unhealthy foods. However consumption of traditional foods that are nutrient rich but energy-dense persisted, with 89.4% of the sample consuming these. Low socio-economic groups were more likely to consume unhealthy foods and individuals who ate more frequently were less likely to eat unhealthy foods. The duration of most food episodes was quick (40.1% at <10 mins; 47.0% at 10-29 mins; 12.9% ≥30 minutes). Shorter food episodes were more likely to include greater intake of unhealthy foods, sweet foods or sugar sweetened beverages, in contrast with longer food episodes, which contained more traditional foods that were nutrient rich but also energy dense and often fried. Families and the home environment were very important in meal synchronization. 82% of meals were consumed at home- especially the evening meal which tended to be energy dense. Consumption of fried foods and sugar sweetened beverages were higher with friends, with whom breakfast was also often eaten. Eating alone was quite common (39% of the sample population).

Globally, two billion people are food insecure, living without regular access to safe, nutritious and sufficient food (1). Food supply is a function of food production, imports, exports and losses. There is insufficient availability of fruits and vegetables in the global food system to meet the dietary needs of all people (2–4). Food loss (FL) in lower-income regions primarily occurs between production to retail stages (5). Fruits and vegetables are among the more perishable food groups and are more at risk of FL. Understanding the nature, stages and extent of FL is critical to designing FL prevention interventions.

We conducted an observational study in Chittoor and Hyderabad districts to estimate quantity and quality FL of fresh tomatoes from farm to retail. Tomatoes were selected because they are highly perishable (6), and are an important vegetable, globally (7). India is the world’s second largest tomato producer (8). In Andhra Pradesh and Telangana, tomato wholesale markets and urban vegetable markets are the major channels through which tomatoes are traded. Chittoor district, Andhra Pradesh is a major tomato producing region and Madanapalle tomato wholesale market is one of the largest tomato markets in Asia. Hyderabad, Telangana is a major metropolis where vegetable markets import tomatoes from surrounding wholesale markets, including Madanapalle. Survey data collection in Chittoor began in February 2019, and in Hyderabad in April 2019. We attempt to measure FL across the supply chain using same-day recalls from farmers, from harvest to markets, and wholesale traders who win auctions from participant farmers. We surveyed urban vegetable traders and retailers to measure FL at the urban market level. In this paper we attempt to answer the question: What is the extent of quantity and quality FL and at what stage does loss occur along tomato supply chains from farm to retail?

Preliminary analysis of an ongoing survey across a tomato supply chain from farm to retail shows that all supply chain actors, with the exception of vegetable traders, report quantity FL. This loss was highest at the wholesale market. Farmers reported greater quality FL than tomato traders. Using same-day recalls, this study adds new insights into the stages and extent of FL along tomato supply chains in south India. Quantity and quality FL estimates within and between supply chain actors are essential to streamlining vegetable supply chains. Determining appropriate measurement methodologies will inform FL reduction interventions designed to improve food security.

FAO, IFAD, UNICEF, WFP, WHO. The State of Food Security and Nutrition in the World 2019. Safeguarding against economic slowdowns and downturns. Rome, FAO; 2019. 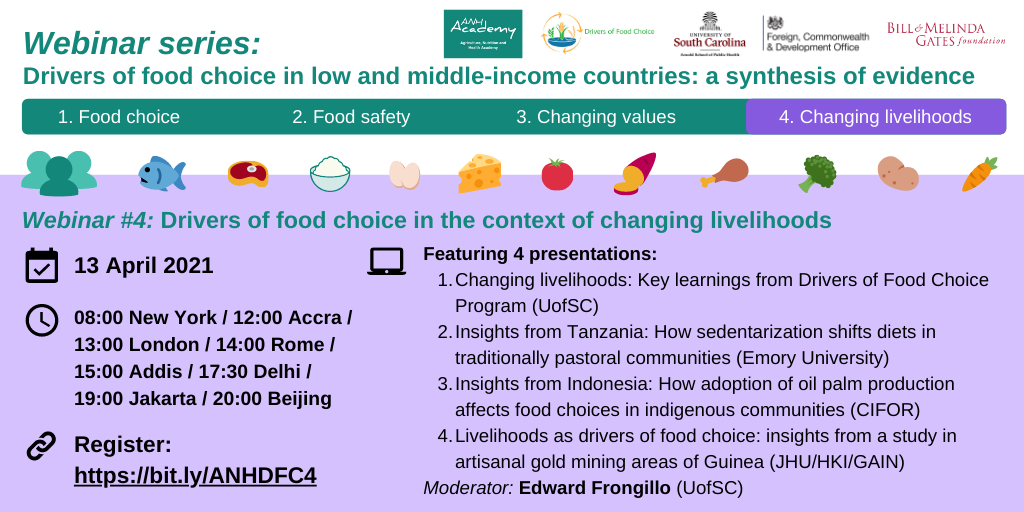 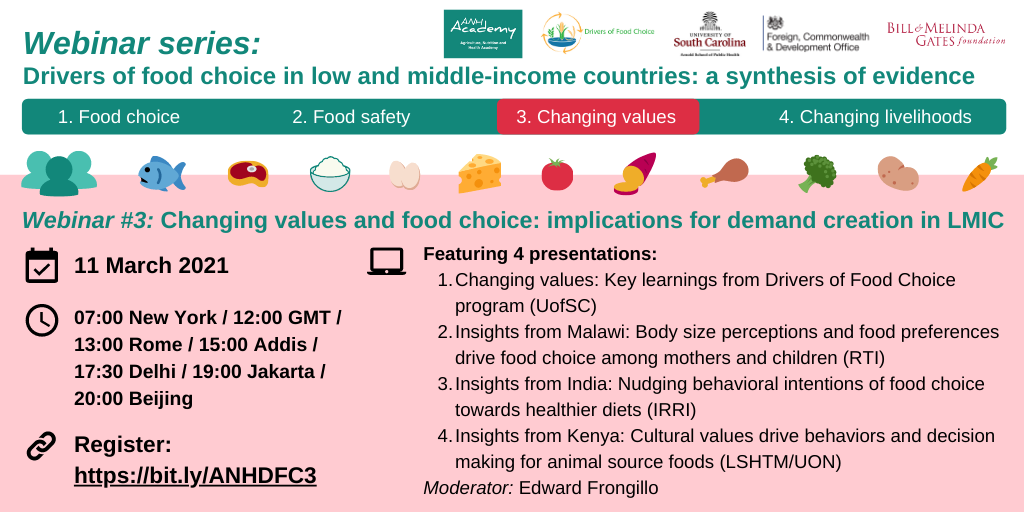 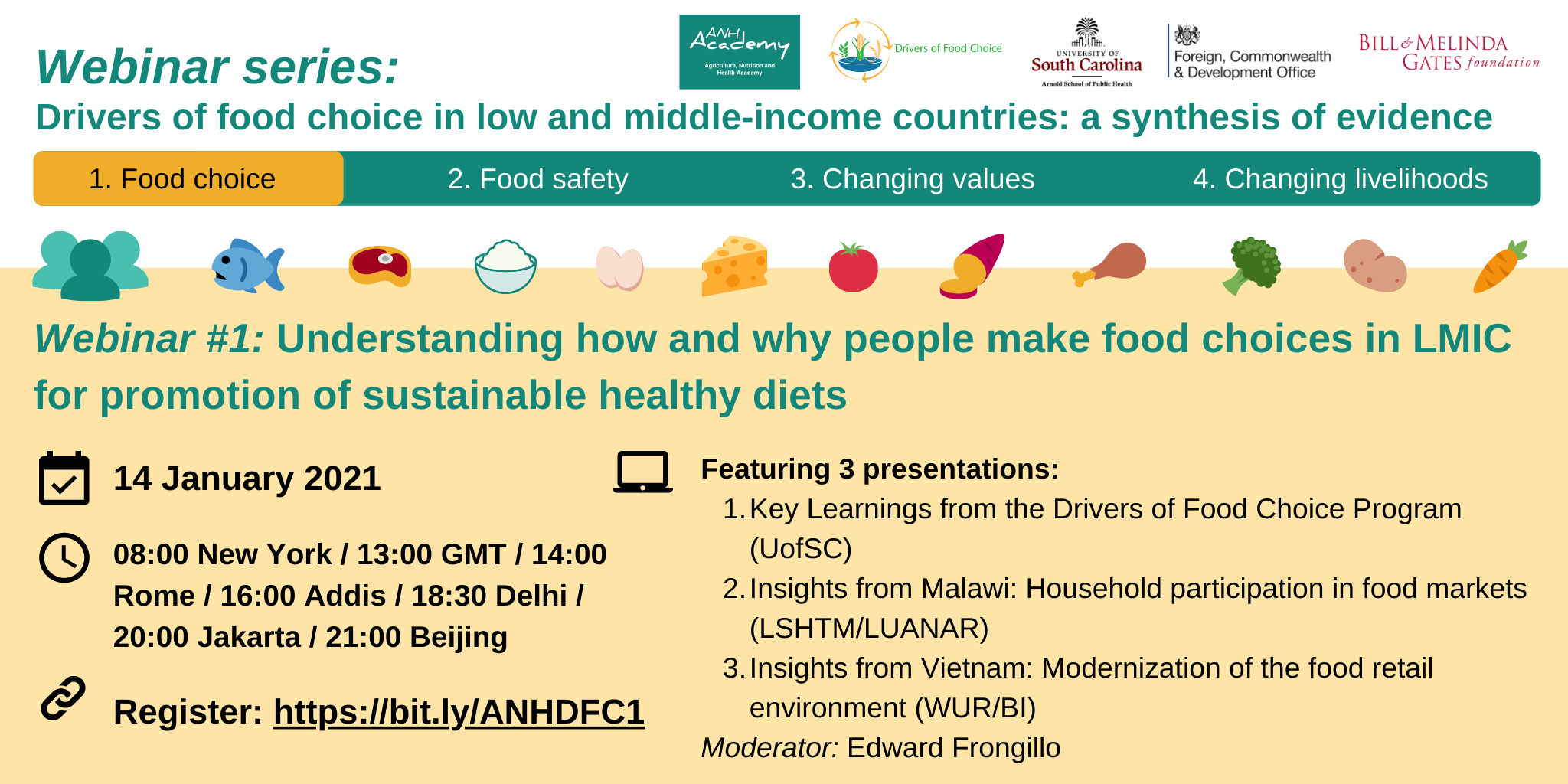 ANH Academy
Webinar
Understanding how and why people make food choices in LMIC for promotion of sustainable healthy diets
14 January 2021 Thu
Time at 13:00