As an unobservable attribute, food safety is likely under-provided by markets in low and middle-income countries where regulatory enforcement is weak. Stimulating consumer demand for safer food can potentially encourage both food businesses and governments to invest in food safety. Previous research in our study region of eastern Kenya shows that the rate of contamination with a carcinogenic fungal toxin varied dramatically across maize flour brands, and was positively related to price (Hoffmann and Moser 2017). However, maize flour processors with better food safety track records do not generally use this information to market their products.

Providing information on safer brands alone did not significantly affect the type of maize flour consumed. However, combining this information with an aflatoxin test of maize flour in the home at baseline increased both the likelihood that a safer brand was consumed at follow-up, and per-unit expenditures on maize flour, relative to the comparison group. Compared to those who received the safer brands message alone, those whose maize was tested were significantly more likely to mention aflatoxin safety as a reason for their choice of maize flour. The stronger impact of the testing treatment, relative to information only, is driven by consumers whose maize was found to contain aflatoxin above the regulatory limit; treatment effects for households in the testing group whose maize was found to comply with the Kenyan standard were similar to those in the safer brands information group. These results suggest that providing information on hazard prevalence for substitute products can increase the effectiveness of efforts to promote the consumption of safer foods.

The wide variation in food safety across maize flour brands in Kenya, and the effect on consumer behavior of information on contamination shown in this study suggest that third-party provision of hazard prevalence information could both reduce exposure to food safety hazards in the short term, and increase market pressure on firms to invest in improving food safety in this context. This approach could be applied to other settings in which safety is found to vary significantly across substitute food products.

Hoffmann, Vivian and Christine Moser., 2017. You Get What You Pay for: The Link between Price and Food Safety in Kenya. Agricultural Economics (United Kingdom) 48(4):449–58.

"I have doubts": Adult Perspectives on Food Safety in Peri-Urban Tanzania

Given the high impact that foodborne illnesses have on death and disability, food safety is a growing global health concern [1]. Increasingly, food safety beliefs and perceptions are playing a role in determine choice behaviors. At present, sub-Saharan African carries the largest per capita burden of foodborne diseases. Because people living with HIV (PLHIV) have increased susceptibility to infection, their understanding of the food environment and food safety are especially important [2]. Here, we describe perceptions of food safety of as conveyed by adults (PLHIV and those caring for PLHIV) living in peri-urban Dar es Salaam, Tanzania.

This study is part of the Diet, Environment, and Choices of positive living (DECIDE) study, a multi-methods study in which dietary intake, food choice, and food environment quantitative, qualitative, and geospatial data were collected among adult PLHIV and caregivers of PLHIV. After providing informed consent, qualitative interviews (n=40) with PLHIV (n=20) and caregivers (n=20) were completed (December 2018 – May 2019) in Swahili. Interviews were transcribed, translated, and checked for accuracy before coding to identify themes. Purdue University and Tanzania’s National Institute for Medical Research approved this protocol. For this analysis of we report on participants’ perceptions about food safety. Consistent with our data management and analytical approach [3], each author independently reviewed all transcripts to ensure immersion in the data. We then identified each participant’s responses to a specific interview questions about food safety. Responses were condensed, coded and reviewed to identify patterns in the data that lead to subcategories and themes reflecting common and different aspects of experiences [4]. Through a series of matrices, we categorized codes in the preset themes, and this process led to the generation of subthemes reflecting experiences and concerns about food safety. As the analysis progressed, all coauthors provided additional insights.

Over 60% of participants discussed various aspects of food safety. Some focused on specific foods with vegetables, commercial chickens, and juices most commonly considered as less safe. Others focused on chemicals and pesticides. The residues on leafy greens and tubers worried several. Others were concerned about fecal exposure based on growing location. A young man said, “I have doubts [about] vegetables because…I see how they are cultivated.” A PLHIV avoided buying juices because, “…most people making juices [do not prepare it in] a hygienic environment.” Like commercial chickens, energy drinks, bottled juices, and soda were deemed unsafe because of chemicals they contained. Diarrhea and stomach ailments were attributed to eating takeout or ingesting locally produced juices and/or snack foods. When this was a concern, participants often described avoiding eating outside of the home emphasizing that they prefer to prepare their own foods. Washing vegetables, familiarity with the food vendor, and observed cleanliness were strategies people used to protect themselves. For example, one participant said, “There is a window, so you can see the meat while you are outside [the butcher shop] … They just wear the white coats with no blood stains…[and] they use modern equipment [to cut the meat].”

Agricultural chemicals, exposure to sewage, and experiences are important drivers of food safety perceptions [5]. Another study focusing on unregulated fruit juice venders in Dar es Salaam showed that E. coli was detectable in 80% of the samples; this may explain why locally prepared juices were a concern. Participants felt they reduced their risk when they bought foods from trusted vendors. Moreover, participants equated observable cleanliness to being hygienic. This analysis sets the stage for developing tools to measure perceptions of food safety and begin to inform policy as well designing food vendor interventions that meets peoples’ needs [1].

Foodborne illnesses caused 420,000 deaths and 33 million disability-adjusted life years (DALYs) worldwide in 2010 (WHO, 2015). Certification for food safety could help address foodborne illnesses (Hoffmann et al., 2019). Concern among consumers and regulators over the safety of fish/seafood has led to enforcement of stringent requirements in the global North. While such standards may constitute barriers to participation in export markets by small-scale aquaculture producers, they have catalyzed upgrades of value chains in developing countries. However, in most developing countries rigorous empirical evidence on consumers’ willingness to pay for fish/seafood safety certification is inadequate.

We designed a framed experiment in the form of the Becker-DeGroote-Marschak (1964)—henceforth, BDM—mechanism to elicit consumers’ willingness to pay (WTP) for safety certified fish. The experiment was conducted with 200 consumers in main fish markets and roadside markets in Lagos, Nigeria. The experiment involved eight catfish products, varying in certification status (certified/safety labelled vs uncertified/non-safety labelled), size (250g versus 500g for smoked fish; and 500g vs 1000g for live fish), and form (smoked vs live). In order to prevent potential order effects, we randomized the order in which fish products were presented. A simple market exercise was then used to give a participant a chance to buy a fish product for himself or herself and family members. In order to ensure participant’s full understanding of the market exercise and to minimize game form misperception (GFM) problem the real experiment with fish was preceded with a warm-up exercise using candies. Although individuals bid for eight fish products, only one was actually purchased if the bidding price exceeded the reservation price for that product. Selection of the product was determined randomly in STATA prior to the experiment.

We find positive and significant premiums for certified catfish. Consumers were willing to pay between 12.5%-29% more for certified fish than non-certified fish. Furthermore, there was asymmetry in the value of the certification scheme; willingness to pay for aquaculture certification was greater for larger-sized fish than smaller-sized fish. For small-sized fish, willingness to pay was only significantly positive for smoked fish, but not live fish.

Consumption of safe and healthy diets is an imperative for realizing food and nutritional security, and achieving sustainable development goals. Consumers' in Nigeria are willing to pay price premiums for seafood safety and environmental sustainability certification. The value of the certification scheme is asymmetric suggesting the need to design different schemes for small value and high value fish products. Furthermore, follow up studies are needed to examine whether the premiums can be transferred back to producers to incentivize adoption of best management practices.

Demand for aflatoxin-safe maize in Kenya: Dynamic response to price and advertising

In markets with well-developed regulatory systems, food safety is a requirement for market participation. In markets without effective regulation, not all food available in the market is safe. This implies that firms can potentially distinguish their products through food safety claims. An expectation that consumer demand in developing countries can help to drive the supply of safer food underlies influential theories of change for improving food safety in these settings (A4NH, 2019; GFSP, 2019). We test this assumption through an experiment that characterizes consumer response to the promotion of safety-labeled maize flour in Kenya.

We partnered with a mid-sized Kenyan maize milling firm that agreed to subject its aflatoxin testing procedures to third party verification and to include a label indicating this on its product. The firm’s pricing strategy, which targeted the lower end of the branded maize flour market, remained unchanged. Seventy-three shops selling the target brand of maize flour were randomized into five treatment groups: 1) Control (24 shops); 2) one round of marketing, no discount (12 shops); 3) multiple marketing rounds, no discount (12 shops); 4) One round of marketing with discount (12 shops); 5) Multiple marketing rounds with discount (13 shops). We estimate the dynamic impact on sales of the randomized intermittent marketing of the food safety-labeled product on sales, as tracked by shop managers. Data from surveys of maize consumers recruited at and near the shops is used to test for impacts of the marketing campaign on consumer awareness of the food safety hazard and safety label. These data were also used to assess from which types of flour consumers were most likely to switch into the safety-labeled four.

We find an increase in sales of the target brand while the food safety marketing campaign was active, but this impact disappears with the cessation of active marketing. By the third time the marketing campaign was implemented at a shop, it had no discernible effect on sales at all. Combining the marketing campaign with a temporary discount was successful in inducing consumers to try the promoted brand, and sales of the promoted brand were elevated for several weeks after the discount was no longer offered. However, the effect of the discount, too, diminished over time, consistent with findings from the marketing literature on price-based promotions. The intervention increased consumers’ knowledge about the health consequences of exposure to the safety hazard and awareness that the target brand was tested. It also increased reported switching out of unbranded flour, a relatively high-risk choice. Our findings are consistent with studies on the promotion of nutritious foods and suggest that direct experience is an important driver of consumers’ food choices. However, learning about a safer product, either through marketing messages or direct experience with the good, does not appear to lead to lasting effects on demand.

While drawing consumer attention to a maize flour label indicating a food safety claim had a short-term effect on demand, this eroded rapidly. Almost all prior estimates of consumer demand for safer food in low and middle-income countries are based on choices made immediately after researchers drew subjects’ attention to food safety. Our findings suggest that this experimental design feature has produced upward-biased estimates of the value consumers place on food safety. Based on the results of this study, consumer demand appears unlikely to catalyze food safety improvements in Kenya’s mass-market maize brands. 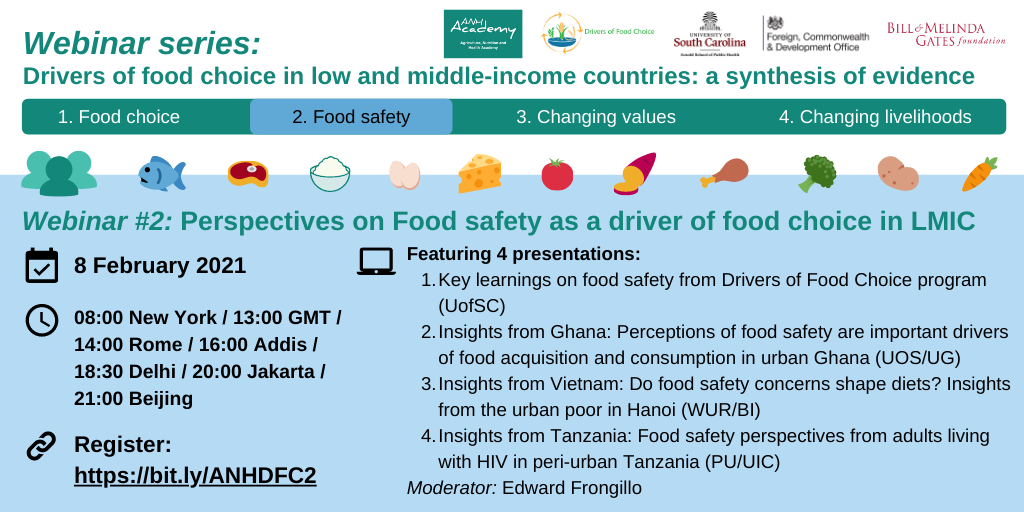 ANH Academy
Webinar
Perspectives on Food safety as a driver of food choice in LMIC
08 February 2021 Mon
Time at 13:00